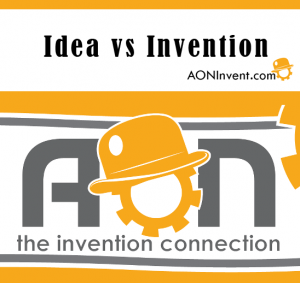 Idea vs Invention: A while back, we met with a creative, energetic young man who was passionate about an idea that he had for a safety device that could prevent children from drowning. During our consultation, I could tell that he had given a lot of thought to what his invention did in terms of product features but had not quite figured out how the invention actually worked.

This is a very common dilemma that defines the difference between an “idea” and an “invention.” Unfortunately, until this young man figures out how his idea works, it is merely an “idea,” which has absolutely no value to anyone.

After discussing possible solutions to the “how” question, he left my office, determined to return one day soon with a solid invention, and I believe he’ll come up with a good one. As he got up to leave, I asked him for his card, but he told me that he quit carrying business cards, because he has a habit of leaving them in his pocket, and then they end up going through the washer and making a mess in the dryer. I just smiled, and he got a big grin on his face. “Hey, I read your blog,” he said, “about the value of a complaint.  What I need is a waterproof business card holder.”

Now THAT’S how an inventor is supposed to think. As it turned out, waterproof business card holders are available on the market, but he is on the lookout for a problem to solve, and I am confident that he’ll find one. So don’t be surprised the next time you complain about a problem if you notice a guy with a big smile on his face taking careful notes.

Click here for our video, “Turning an idea into an invention”.

Melinda is a blogger, graphic designer, and stay-at-home mom living in Palestine, Texas.

Newsflash: A Twig is not an Invention

The all-too-common frustrations of the Invention process