Patents: What is a Patent? 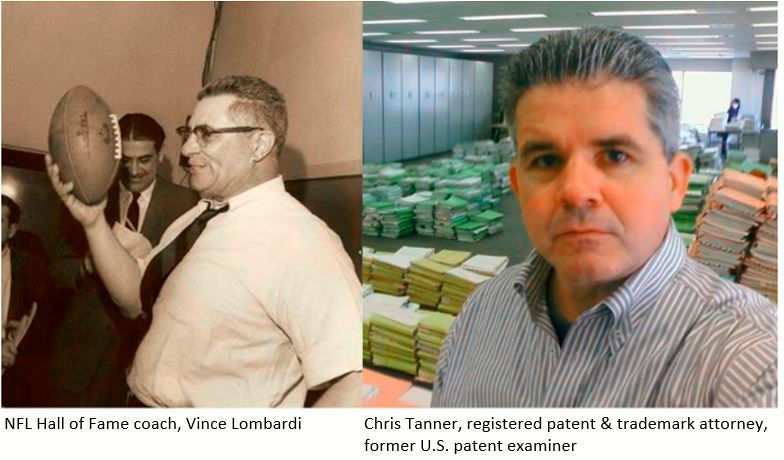 Legendary coach of the Green Bay Packers, Vince Lombardi famously began the first practice of each season, by stating the obvious, “Gentlemen, THIS is a football.” Lombardi realized that success, on or off the field requires a thorough understanding of the fundamentals. This blog post is our first in a series dedicated to helping inventors make informed decisions by better understanding “intellectual property” in all its many forms. With that, it seems appropriate to begin this series with the topic we are asked about most…

Inventors,” THIS” is a patent!

A patent is a legal mechanism for describing and protecting an invention by excluding others from making, using or selling it for a certain period of time. A patent application has numerous parts, but in this post, we will focus on the 3 most important elements of a patent:

Patent claims can be difficult to understand, partly because they are written in a non-conversational style of English, similar to real-estate language in a property deed, such as “described herein is a property, bordered on one side by a . . . , bordered on another side by XXXX, and also bordered on its front side by Maple Street”.  The purpose of a property deed is to universally convey to any interested party, exactly what is contained in a property and what is not.  A key principle of deed language is that every person who reads the deed should have the exact same understanding of where the property is and who owns it.

As a patent attorney and former Examiner at the U.S. Patent Office, it has been my experience that the chances of obtaining a patent are in direct proportion to the length and detail of the specification and drawings.  Shorter applications tend to be rejected more easily.

A patent disclosure should show one of “ordinary skill in the art” (average skill in the relevant industry), how to make the invention.

A patent is not intended to be a bulletproof vest that can protect an invention against all competitors. The U.S. Government does not enforce patents, and there are no “federal patent police”.  In other words, having a patent is not a guarantee that competitors will not steal your idea or knockoff your product. Patents are merely one weapon in a much larger battleground of the marketplace, but more on that later. Stay tuned for a discussion on copyright.

Get Our Famous Innovation Guide

Here is your free Step 1 Blueprint that has saved countless inventors time and money. If you believe you have a good idea for an innovative product, it is absolutely vital that you read this BEFORE spending a dime with us or anyone else. It contains simple techniques that could either make you money or save you money, but failing to read it could cost you thousands.

Chris Tanner is a registered patent and trademark attorney, and former U.S. patent examiner. Chris has worked with hundreds of inventors and small companies, and has been involved in the prosecution of more than 1500 patent applications. Contact Chris at law@tannerpatent.com YouTube.tannerpatent.com

What is a copyright?

Newsflash: A Twig is not an Invention